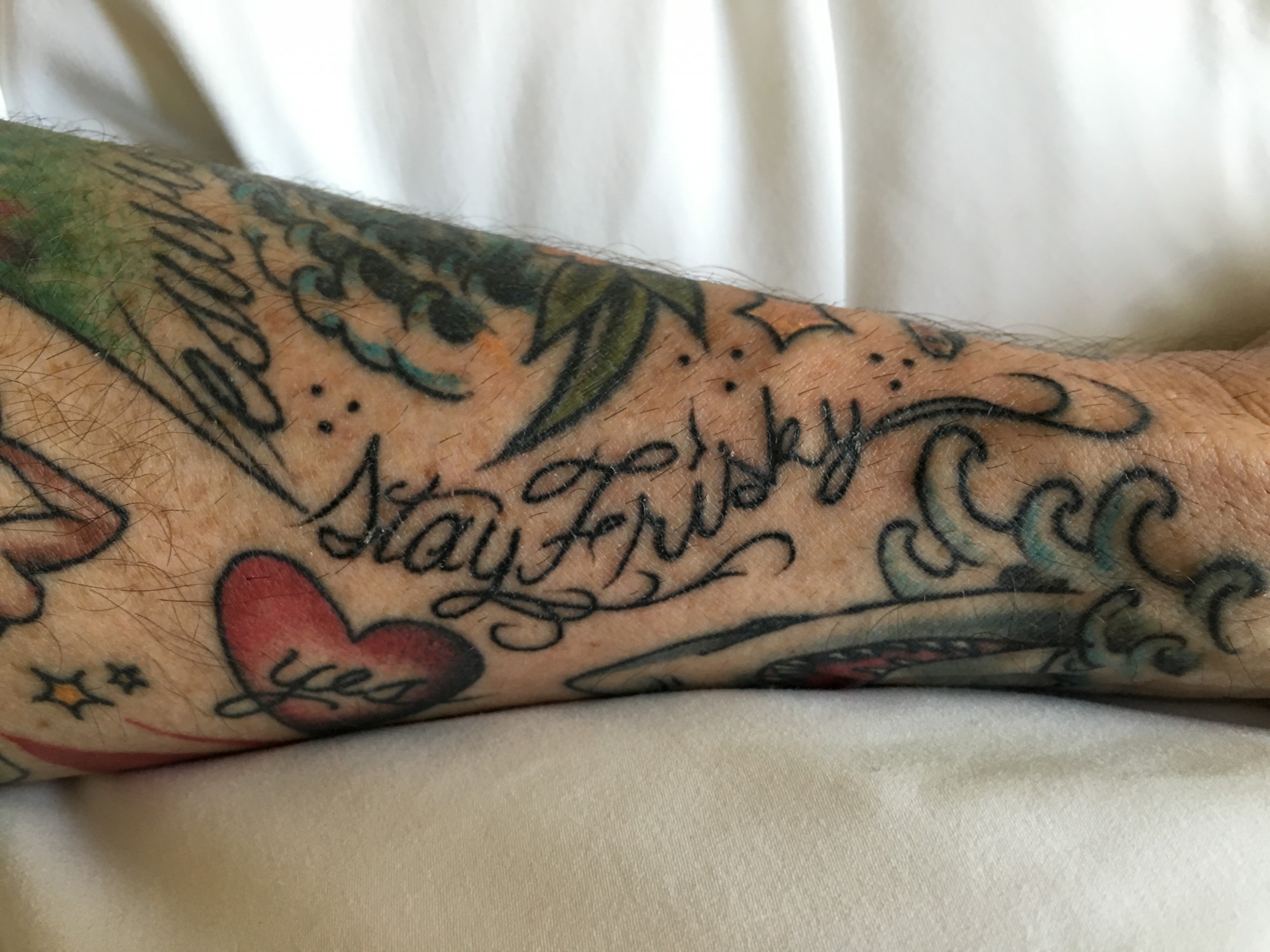 We were recently in Charleston for the Food & Wine Festival. These festivals are always fun. We see our friends who are also on the travel circuit, we get to share our wines, and we usually eat and drink well, oftentimes with ‘well’ lightheartedly skipping towards ‘excess’.

In this spirit, after working events all day Friday, we spent Saturday as such: super early wake-up call in order to go fishing; meeting friends for a boozy lunch wherein we decided to book a trip to see The Cure in Vegas; and finally, inexplicably, we found ourselves in a mini-van (all Ubers in the South seem to be mini-vans) heading to an out-of-town tattoo parlor that was highly recommended by a local Celebrity Chef.

Richard had decided that he was going to get a ‘banger.’ He’s just learned this word, and he’s been eager to give it a test-run. (A banger is a tiny, spur-of-the-moment tattoo, acted upon without any deep thought.) Completely apropos, his banger was going to read, Stay Frisky.

Imagine, if you will, The South where we were headed; a place very different from the vanilla cuteness of the old-school, manicured, hyper-pleasant, and eminently lovable Charleston proper. In this part of the South there are more churches than people and the nearest bar is a strip club (we know this because we wanted to have a quick beer while waiting for the appointment, and the three closest bars were in fact strip clubs.)

Our mini-van full of toasty comrades (fortified by laughter, rosé and agave spirits) hurled its way onwards and across the tracks into a part of town where many people appeared to have begun the steady decline of premature aging due to heavy smoking and extreme lifestyle choices. Finally the van pulled into an empty parking lot, sandwiched between the tattoo parlor and the only other operating business in the area: the local butcher shop, specializing in off-cuts and sausages. We have arrived.

Now, a quick download of modern tattoo protocol: when you get a tattoo, the artist draws a preliminary version of your art on a thin piece of see-through paper, which you can then lay over where you’d like the tattoo done in order to get an idea of what it will hopefully look like. Remember tracing things as a kid? There you go.

The first test version of the banger came out so large that it would’ve easily overlapped Richard’s other tattoos. That won’t do. Richard looked up at me through his warm tequila eyes, and I understood his concern: dodgy-ass tattoo studio off a side road, 30 minutes from any town center, yet we’re here… We’ve committed… He gently suggested the artist shrink it a bit and try again.

The next rendering fit well, but as the kid held the onion skin paper over Richard’s wrist, waiting for approval, both Richard and I noticed how heavily his hands were shaking. We looked at one another. Huh. Ok.

Then Richard slipped into one of the best renditions of himself: he became the host. He quietly said, ‘Hey, man, do you smoke?’ The kid answered yes. ‘Can we grab a cigarette together outside before we get started on this?’ Yeah, sure.

Keep in mind Richard doesn’t smoke; he’s probably smoked a grand total of six cigarettes in his entire 45-year life, which is a strange innocence given that he’ll consume almost anything you put in front of him. He donned this James Dean slick, and as he nonchalantly walked outside, I pulled him aside: “Are you sure you wanna go ahead with this?”

He told me he wanted to make sure the kid felt comfortable; he wanted to give him whatever usually put him at ease. Richard wanted a legible tattoo without any junior varsity fuck-ups, and the way to get what he wanted was to create a safe space for this kid in that moment. The kid could’ve simply been shaky, he could have had a hangover, or he could’ve been strung out (we were definitely in the neighborhood for it). But Richard opted to shift into a gear he knows well: instead of getting stuck on what you want, place your focus on what the person opposite you needs, and usually you end up where you actually want to be. It’s the damndest thing.

Working in hospitality allows you to fine-tune the ability to read a person very quickly, discern what they are comfortable eating, drinking and spending – you’re hosting and it can be immensely gratifying. When done well you read your guests better than their therapists do and are able to act swiftly on what you intuit.

This ability to read people is not necessarily a learnable trait; it is an honest to god talent. There are plenty of people in the industry who don’t have the knack for it, and in fact are never aware of its existence until perhaps they receive it as a guest of a better hospitality player. This ability to take care with someone is invaluable; it can be one of the strongest, most reliable tools in your life-kit, and it’s undoubtedly one of the greatest gifts we have to offer one another.

The tattoo turned out beautifully; the artist even felt comfortable enough with Richard to suggest a few embellishments of his own, which imbued the banger with a piece of himself. And in the end, his hands were as still as lakes on early mornings while working. He and Richard were in the flow together, and it was a beautiful thing to witness.

This is not a love letter to Richard. This is a salute to a deep understanding that everyone needs that love, that attention, that listening. Even jacked-up kids with tender hearts in the ‘burbs of better-known towns of South Carolina.

← Back to an infrequent blog